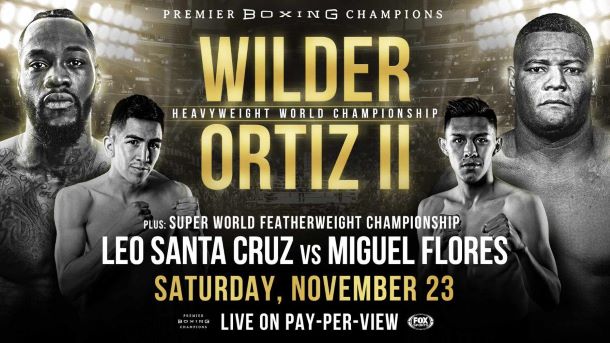 Las Vegas is a city built on gambling and, on Saturday night, it will be Deontay Wilder who’ll have all his chips pushed to the middle of the table.

There’s more at stake than just his WBC heavyweight champion’s belt. There’s a huge payday over the horizon against Tyson Fury. In many ways, Wilder is the anti-modern day champion. When he says he wants to fight the best, he means it.

Wilder’s next two fights are against his toughest opponents so this isn’t your typical warm-up fight.

Luis Ortiz came the closest to knocking out the champion when they met in Brooklyn in 2018.

After sending Ortiz to the canvas in the fifth round, Wilder was caught with a counter right hand in the 7th. Sensing the champ was ready to fall, Ortiz attacked Wilder landing even more hard shots but Wilder was able to survive the 7th and make it through the 8th. In the 9th round, Wilder composed himself and got the fight back in his favor before finishing Ortiz off in the 10th.

In the rematch, the danger for Wilder will be his patience. Part of Wilder’s popularity is built on his theatrics. He always want to be the show in and out of the ring. That’s not meant to be negative. Frankly, boxing needs a personality like Wilder to keep the casual fan interested in the sport. Wilder talks the talk and walks the walk. That could put him in incredible danger.

Wilder tends to get wild for periods in all of this fights. Will Ortiz be able to counter like he did in the first fight? If so, he knows he can hurt Wilder. The champ can’t go in there looking for a quick knockout or the tables could be turned on him and a loss would take some steam off his rematch with Fury.

With that being said, Wilder’s confidence is refreshing. Boxing is a business and it’s hard to make fights against other champion level opponents especially those with another management company/network.

Wilder has never been shy about betting on himself. It’s a gamble all boxing fans enjoy.