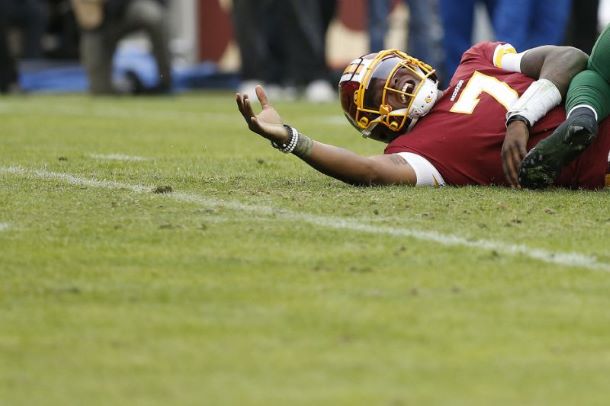 Only Washington’s football team could get blown out by the New York Jets but have that not be the worst thing that happened that day.

In their 34-17 loss to the lowly Jets, there’s a video showing Dwayne Haskins practically begging the offensive line to tell him what he could do to help them.

“What do I have to do to help you?”
-Dwayne Haskins (@dh_simba7) pleading to the #Redskins O-line #HTTR pic.twitter.com/5UAouDHXYq

If any other young quarterback did this, he would be heralded as a leader beyond his years. Instead in Washington, the story is the offensive linemen basically looking bothered by Haskins’ presence. They looked like they wanted to say “kid… just shut up and play out the string like the rest of us”.

For weeks, every Washington DC sports media blabber-mouth has been running to the mic talking about how Haskins is over his head. Former head coach, Jay Gruden didn’t want him and did little to nothing to help in his development. If there was ever a day for the Jay Gruden apologists to celebrate, it was yesterday.

Now the five guys who are responsible for keeping him upright are sitting there looking as disinterested as the thousands of empty seats out at Fed Ex.

Monday morning has become another platform to show how dysfunctional this team is. This is just the latest installment.

Never forget this is really a thing Bruce Allen said. The Skins are now 1-9 after getting blown out at home by the Jets in front of an empty stadium. pic.twitter.com/uaJfvjfqkm

Once upon a time the Raiders had this same issue. Remember Todd Marinovich? JaMarcus Russell? Sure both of those guys had off the field issues to deal with so that is slightly different than Haskins.

Where the situations are the same is, that some quarterbacks need more organizational support than others. If Haskins was a reach at 15, then it had to be a reach by an organization that has a strong culture. Washington isn’t it. Just like the Raiders, you can argue that there isn’t a young quarterback who could reach his potential in an environment that leads the league in toxicity.

That’s what makes the Haskins video so sad. Here’s a guy whose heard all the talk about how he isn’t ready. He’s even heard the always passive-aggressive racist “can’t read defenses” which is always the go-to of the idiots.

With all that weighing over him, Haskins is committed to the craft. Committed to proving his doubters wrong by working hard. And, this is what he gets. He gets a bunch of offensive linemen who simply want to see the season end.

For all of the kvetching about Haskins, drafting his 15 isn’t the problem. The problem is the five guys who are responsible for his well-being.