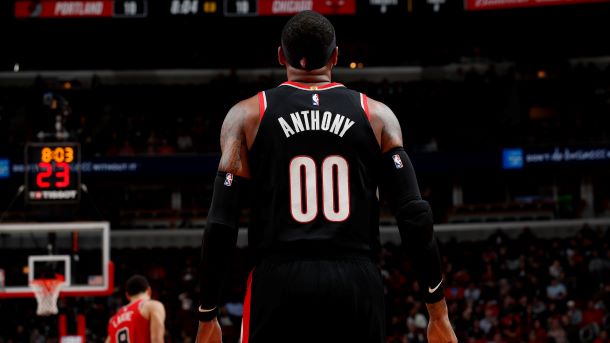 Don’t Call It A Comeback

Carmelo Anthony waited for over a year to get another chance to get in the NBA. No one was sure if the opportunity would arise after being out of the league that long. With so much time passing between Melo’s jab steps, the question was could Anthony be effective if he came back?

The question was fair. He had lost a step. He’s not a true stretch four by today’s standards. And, his defense… woof. But the best thing that happened to Anthony was Portland’s slow start. The Trail Blazers were in last season’s Western Conference finals without the injured Josef Nurkic. The expectations were plentiful especially with the anticipated ‘step back’ by Golden State. But it wasn’t working. Hassan Whiteside was brought in to buy time until Nurkic’s return. Whiteside’s numbers are “on paper” good but wasn’t impacting the outcome. In between rap beefs with Shaq, Dame Lillard was shouldering too much of the offensive pressure.

In step Anthony to provide some much needed help on offense. His first game was forgettable except to all of the Melo detractors who were quick to point out his -20 in Portland’s loss to New Orleans. The Trail Blazers would lose their next two including an awful loss to the Cleveland Cavaliers but there were signs that Anthony was finding his court legs.

The last two games could be an indication that the Trail Blazers and Anthony are finally getting some chemistry. In wins at Chicago and home to Oklahoma City, Anthony has averaged 17 points and six rebounds per game. He was 19-30 from the field including 4-8 from the three point line in those two games. For the +/- police, Anthony was a combined +46 in those games.

Lillard acknowledges that Anthony has provided “a spark and some energy that our team needed. It’s fun to see.” In the three games, Lillard and Anthony have played together, the Trail Blazers are 2-1. Lillard is 10-22 from the three point line in those games because the floor has opened up and Anthony and his teammates get used to playing with each other.

Anthony has made it clear he isn’t done. ‘This ain’t a damn farewell tour,’ Anthony told Shams Charania of The Athletic.

We hear you Melo… we hear you.