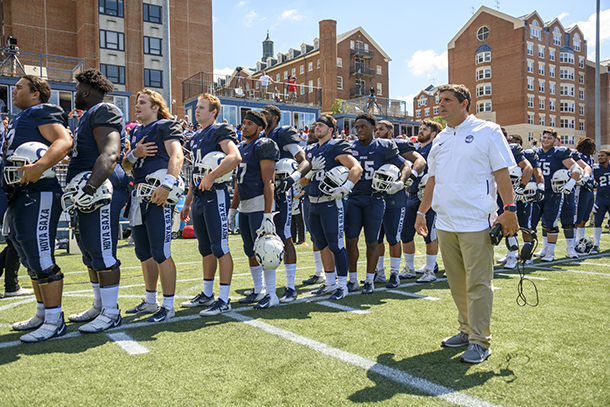 Georgetown Football: Culture and Academics Lead the way in Recruiting

Georgetown football has jumped off to 3-1 start after a 24-10 victory at Columbia. The victory was the third straight for the Hoyas.

Hoyas’ head coach, Rob Sgarlata continues to build a program that is steadily becoming a team of note in the Patriot League.

The progression in the football program is being built on the strength of a national recruiting base.

Georgetown’s roster consists of 86 players from 24 different states. This is even more impressive when you consider the high academic standards along with the policy of not offering full scholarships.

Recruiting Coordinator Alex Kolt acknowledges that location is part of the allure of coming to Georgetown. “Big thing for us is getting them on campus,” said Kolt.  With the White House and other monuments within a stone’s throw, there is plenty of appeal for recruits to choose Georgetown over other universities.  “Georgetown is a place you have to visit to appreciate,” said Arizona transfer Gunther Johnson.

Having such a diverse locker room allows players to grow from both an academic and social perspective. Freshman offensive lineman Sam Telesa made the trip from Oregon to Georgetown. “Being on this coast it’s such a melting pot. There are people from everywhere,” said Telesa. “They teach me things I don’t know and I teach them things they don’t know”.

Junior linebacker Wes Bowers is from Maryland. Despite the option of leaving the area, the appeal of playing for Georgetown was too strong. “The biggest aspect why I picked Georgetown was the family feel and the vision the coaches had for the program.”

Georgetown’s strong academic reputation is a big draw for student-athletes. Forbes ranks Georgetown 15th in the nation. The balance between athletics can be challenging for incoming freshman. Bowers spoke about transitioning to Georgetown as an incoming student and the Jump Start program. “We talk about how you’re going to adjust to the school aspect things, said Bowers. How to plan. How to make a study guide. We always strive for that 3.0 and above.”

The aggressive attitude for academics melds perfectly with the football program. Football is a sport that requires extensive learning of a challenging playbook. “Coach (Rob) Spence speaks about how football is a classroom itself. There are no walls, no limitations” “Being able to study our plays and study the curriculum that we are studying in our class,” said Telesa.

Georgetown University provides athletes with the opportunity to be part of a special community on and off the field. “We’re blessed that we’re not at a place that’s silo-ed where athletics is it’s own thing. When you come here you come for the full experience,” Sgarlata.

The Georgetown family extends beyond the four years on campus. This is summed up in three simple but powerful words, “Four for Forty”. When making his decision about what school to attend, sophomore Palmer Nix was attracted by how Georgetown can set a player up for their future. “I was really attracted to the four for forty motto, said Nix. Four years of football and school sets you up for the next forty years.”

Georgetown provides it’s student-athletes with an opportunity to be part of a special community where athletics walks hand in hand with academics. “It’s not mutually exclusive to be great on the football field and great in the classroom. They go together. The things that you learn in the classroom are going to help you on the field and vice versa,” said Sgarlata.

Recruits nationwide have signed up for a challenge that could eventually lead to the highest levels of success on and off the field. “We are going to win championships because we are going to find people who are great at everything that they touch and have that drive.”