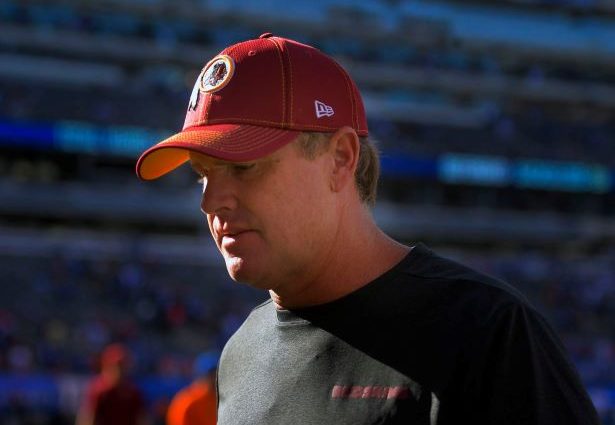 Another Sunday. Another loss for Washington’s once-beloved football team.

This one came at the hands of the New York Giants and their rookie quarterback. Daniel Jones has taken over for two-time Super Bowl winner, Eli Manning, and led Big Blue to a 2-0 record.

Washington has fallen to 0-4 and opened up a can of controversy when they inserted their rookie quarterback, Dwayne Haskins. The rookie quarterback would end the day was 9 for 17 for 107 yards and three interceptions. Not a rip-roaring start but to be fair,  it doesn’t seem like Jay Gruden has any intention of developing Haskins. At least, not anytime soon.

There’s no guarantee that we are going to see the Haskins era begin. Remember, Gruden has a love affair with Colt McCoy and the journeyman back-up quarterback, could be ready to play soon.

If Keenum continues to play poorly, one would expect McCoy to take over the job. Gruden has no intentions of working towards the future. A future that might not include him. So it’s dam the torpedoes for those four or five wins the team might get this season. Of course this doesn’t do the organization any good but, heck, Washington fans will remember those all important handful of wins.

Very seldom does it make sense to fire a coach so early in the season but this is a situation when firing the coach is justified. Washington needs a coach who will see the big picture. The NFL has been built around the quarterback position. It makes little to no sense to have a coach on a habitually bad team refuse to help develop the quarterback position. It doesn’t matter if said coach didn’t want that quarterback. If that’s the case, find a coach who will.

A source with the #Redskins tells me

“Jay Gruden isn’t putting [Dwayne] Haskins in a position to get better. He’s not getting any reps with our offense. He’s running mostly scout team. If Gruden keeps Haskins in this position, how will he ever be prepared to play?” @wusa9 #HTTR pic.twitter.com/fSE1apACno

Out in Los Angeles, Jeff Fisher was well on his way to ruining Jared Goff. The Rams made the decision that it was more important to have a head coach and staff, that would try to develop Goff in earnest. If it didn’t work, the organization would move on but they weren’t going to watch Goff get ruined by a coach who couldn’t see the big picture.

Gruden has had over five years and multiple quarterbacks. None has produced a consistent product for the football starved Washington DC area to rally behind.

It’s easy to blame Daniel Snyder. There are a myriad of examples where Snyder and his sidekick, Bruce Allen, have deserved every bit of the blame they’ve received. But this isn’t one of those times. Gruden has had ample opportunity to turn this team around. He’s had every opportunity to define the culture. He’s failed. He deserves a lot of the blame for the 0-4 start.

Yesterday is the prime example. Gruden sent Haskins to a gun battle with a pocket of rocks. How could Haskins succeed when Gruden has yet to give him a chance to succeed. He threw him to the wolves with no preparation so he could look at everyone and say ‘See. He isn’t prepared’. In reality Haskins performance was an indictment of Gruden’s inability to run a team.

The 0-4 start isn’t on Snyder. It isn’t on Allen. It’s squarely on Gruden and if Snyder fires him, it will be one of the few right things he’s done.