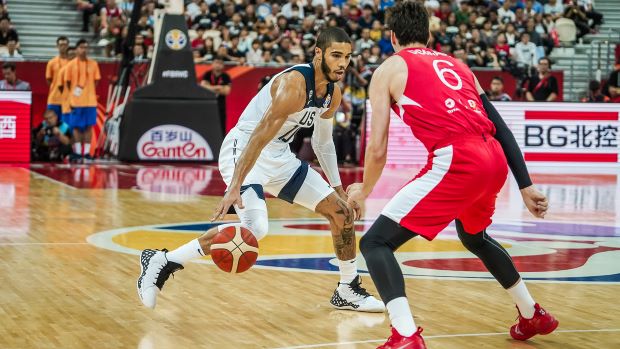 Team USA escaped with a 93-92 overtime over Turkey today but it came at a price.

Jayson Tatum sprained his ankle in the final moments of overtime. When asked in the postgame press conference, Tatum said “It feels better than when it first happened. I can walk a little bit. Obviously, it’s sore … just get some treatment and see how I feel.”

The bigger problem could be the much scrutinized structure of this team. When Jerry Colangelo changed the selection process, it was supposed to resemble a constructed team not an all-star team.

Well, for various reasons, the team’s roster appears to be what everyone worried about, poorly constructed for International play.

In the game against Turkey, the US had problems guarding the post and the pick and roll. In other words, it has problems with the two staples of International basketball.

It’s already been well-established that this team isn’t going to overwhelm you offensively. Defense and rebounding is the key. So when head coach Gregg Popovich decides he can’t play any of his three big men in crucial moments, there’s a problem.

When the US switches on ball screens and teams decide to post up the likes of Kemba Walker, there’s a problem. “Defensively, we got some things we can chew on,” said Harrison Barnes.

Team USA hasn’t seen this many roster holes since the 1988 Olympics.

Serbia was ranked number one in the FIBA World Cup Power Rankings and Team USA hasn’t done anything that makes you think otherwise.

We all knew this US Team wasn’t going to knock your socks off but today, exposed the worst fears.

Turkey shot a high enough percentage (43.6%) from the field to win the game. It was their free throw shooting, 14-23, that cost them. This includes the 0-4 stretch, in the last nine seconds, that would have sealed the game for Turkey.

In contrast, the US looked like a team that would struggle against changing defense. Turkey employed both man and zone and the US did two things they can’t afford to do. They shot a poor percentage (35%) from the field and they turned the ball over (14). When asked about the zone offense, Walker said, “Oh, we got to work on that.” As for the turnovers, Jayson Tatum and Harrison Barnes combined for 9 of the US’ 14 giveaways.

With the World Cup having a record number of NBA players, this is neither to time or place to be as overwhelmed by the moment as much as this team seems to be.