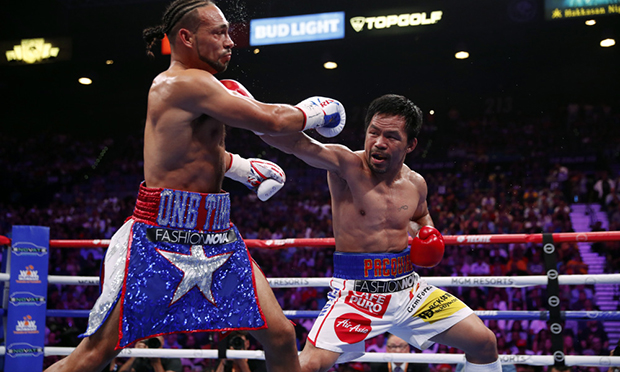 What’s Next for Keith Thurman?

For a fighter who was off two years with one warmup fight, Keith Thurman performed admirably in his bout with Manny Pacquaio. But, it was obvious, Thurman wasn’t ready for someone’s of Pacquiao’s class.

Thurman went to the canvas in the first round and was hurt again in the tenth round en route to a split decision loss.

What’s up for Manny Pacquiao is up to his choosing but what about Thurman? The next opponent his selects could be career altering. Some suggest a rematch with Danny Garcia. There’s no way Thurman should take that fight. The first fight ended in a tough split decision win for Thurman. After the beating he took at the hands of Pacquiao, an immediate loss to Garcia could put Thurman’s career in a bad direction.

The smart decision might be to fight one of the two winners of the undercard, Yordenis Ugas or Sergey Lipinets.

Ugas is coming off an upset unanimous decision win over Omar Figueroa Jr.

Lipinets win was in more electrifying fashion. The former world champion kickboxer defeated Jayar Inson by TKO at 0:57 of the second round.

Either one would provide Thurman with a good test without it being on a Pacquiao/Garcia world class level.

Thurman will also need to be a busier fighter. After taking two years off, he needs to get in the ring and show a commitment to the sport. He’s in the most competitive weight class in all of boxing. He needs to get every bit of ring rust off.

As for now, he’ll recover from his physical wounds and the mental ones that comes with losing his “0” as he decides what’s next.