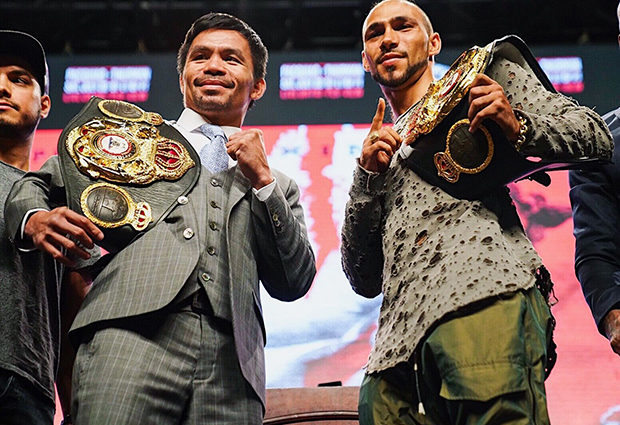 Who: Manny Pacquiao vs Keith Thurman

No one was more brilliant later is his career at fighting a top-flight name and just the right time than Sugar Ray Leonard.

Leonard used his retirement(s) to rest up and look for flaws in his opponents. Then BAM… Leonard would come out of retirement.

Manny Pacquiao has never retired but what he has done is see a flaw in a big name opponent and pounced on the opportunity to fight. There’s a reason why Pacquiao avoided Terrence Crawford, even though, they were both with Top Rank at the time. He also could have made the fight with Danny Garcia but strategically chose Thurman.

Keith “One Time” Thurman was out two years with an injury and, after a poor performance against Josesito López, decided he’s ready for Pacquiao. Despite all of that, Thurman appears to be very confident that he’ll knock Pacquiao out. ““I say I’m going to put him to sleep because I’ve got power,” said Thurman at Thursday’s press conference.

But talk is cheap. Adrien Broner did plenty of talking prior to taking a embarrassing beating from Pacquiao. He might not be the old Pac-Man from the Juan Manuel Marquez fight but Pacquiao has transitioned nicely to doing more strategic boxing along with staying true to his old style. It’s helped him still be one of the most attractive fighters in the world at the age of 40. “My feeling right now is happiness and excitement to prove that at the age of 40, I can still show my best,” said Pacquiao.

Pacquiao has made a career of making fighters pay for their mistakes which gives him a great chance Saturday night. Thurman’s punches can be wild and wide and that gives Pacquiao a perfect chance to counter with his power. Thurman’s style along with Pacquiao’s jab and movement could make for a frustrating night for the younger Thurman.

Though it seems counterintuitive, the longer the fight goes, the better it is for Pacquaio. His ring activity and ring generalship will give him the advantage in close rounds. He can easily make Thurman look like he’s wasting aggression similar to what Leonard did to Marvin Hagler.

Both fighters want an action fight and that will be good for the fans. Pacquiao said, “I respect my opponent because we both believe we can give a good fight to the fans. That’s our first concern. The fans and the enjoyment of the fans.”

No matter who wins, I’m sure the fans won’t be disappointed.