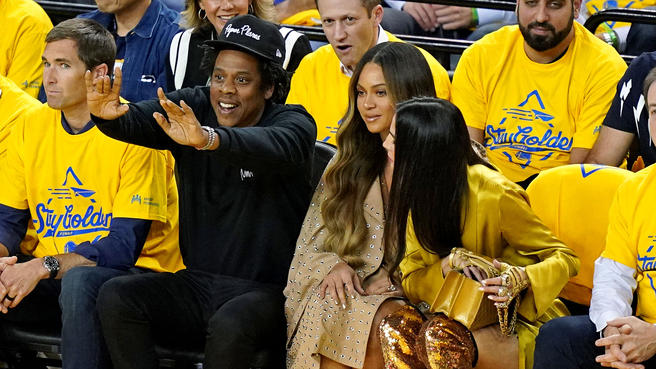 Toronto’s 123-109 Game 3 victory in Oakland is the story that lies below the fold.

Wednesday night was an ordinary night in the NBA.

It started with the health of Klay Thompson. The two-way guard had injured his hamstring in Game 2.

Holy crap was that an awkward landing by Klay. Lucky he’s okay. pic.twitter.com/r20e70Kujq

Hours before Game 3, it was said that the Warriors wanted Thompson to sit out of Game 3 but Thompson was campaigning to play. Social media doctors, former players, and media spoke looked over the video of the injury as if it was the Zapruder film in the movie JFK.

Ultimately Thompson was ruled out for Game 3 because common sense took over. Missing Thompson for a game, albeit an important one, isn’t worth the risk of losing him for the series especially with Kevin Durant already out.

Kyle Lowry’s Trip to the Stands

Kyle Lowry has taken his share of playoff criticisms throughout his career. Some have been deserved, others not so much.

This playoff season got off to a slow start for Lowry but he has performed at a high level the last three series and has slowly started to change the narrative.

In Game 3, Lowry’s name came to the forefront when he dove into the stands for a loose ball and had a fan lean over and shove him while saying some things that shouldn’t have been said. Lowry would keep his composure and point the fan out to the authorities. The fan was eventually escorted out of the arena.

What we would later find out is this wasn’t an ordinary fan. It was Mark Stevens. Stevens has a minority stake in the Golden State Warriors. In what has become a staple of the Adam Silver era, the league responded quickly. Stevens has been banned from NBA arenas for a year and fined $500,000.

“It’s not a science in making these decisions,” Silver said. “Ultimately, we felt that given how contrite Mr. Stevens was — he was extraordinarily apologetic — the fact that he had no blemishes on his prior involvement with the NBA or the Warriors, a one-year ban seemed appropriate. – LA Times

Fan behavior has become increasingly worst as fans act like entitled dullards. The NBA has been proactive in enforcing fan behavior policies that other leagues overlook. But, like so many other things, the NBA is out front on issues and, hence, on the right side of history.

Speaking of fan behavior, this one is more reflective of the fan worship side of our society.

Just spoke to Nicole Curran, the wife of Warriors owner Joe Lacob, about the “incident “ with Beyoncé last night. She was in tears. Said she had been getting death threats on social media all night this morning she disabled her IG account just to make it stop.

Why you might ask? Because in a video that went viral, it looks like she’s being shoved by Beyonce Knowles.

Just like many celebrities, athletes, and politicians, their most ardent fans felt the need to “defend the honor of Knowles.

The proper reaction to this would be for each and every social media platform to ban those people for a year and fine them $500,000. I bet that would get it to stop.