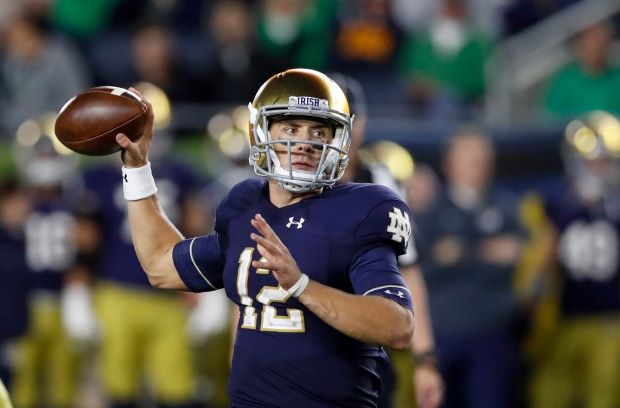 Does Ian Book Have an Encore?

The last time we saw Ian Book, he was on the wrong end of a 30-3 drubbing in the College Football Playoff. To be fair, Notre Dame as a team looked overwhelmed by Clemson’s speed and athleticism. This isn’t a criticism of Brian Kelly and the Irish. What Kelly has done with Notre Dame in this era has been nothing short of amazing. What the Clemson game showed the Irish that they still have work to do.

On paper, Notre Dame’s schedule will be even harder this season. Road games at Georgia and Michigan highlight one of the toughest schedules in America. If the Irish run the table this season, they’ll be back in the College Football Playoff.

Their ability to do that will way heavily on how Book navigates defenses that now have a… wait for it… book on him. Losing wide receiver Miles Boykin will be tough but Chase Claypool’s decision to return to school was huge for the offense. Claypool, along with the gritty gutty Chris Finke and tight end Cole Kmet should provide Book with plenty of targets.

The question will be, what will Book do with them? Will he take more chances downfield? According to Indy Star’s Mike Berardino, the Irish coaching staff would like Book to be more aggressive.  After one particular practice offensive coordinator, Chip Long said, “I don’t care to see a check down. I want him to try to throw the whole shot.”

That sounds good in the Spring but can the Irish as a whole live with the potential mistakes that come with it? Last season, Dexter Williams was able to take some of the pressure off the offense especially after the benching of Brandon Wimbush. With Williams gone, there is some question about the Irish running game, even though, Jafar Armstrong has garnered some praise in the offseason. But, questions still remain if it will be enough.

This probably plays heavily in the Irish’s thinking about Book needing to be more aggressive. If they want to avoid another Clemson debacle, big plays in the passing game is a must.