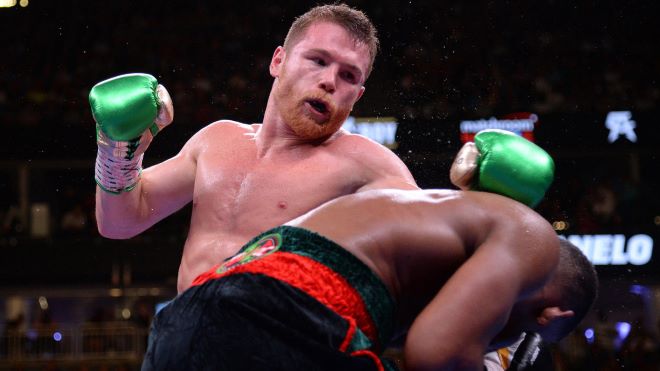 Canelo Alvarez’ over Danny Jacobs last night was the latest in a long line of Cinco De Mayo weekend fights. Though Jacobs was competitive, the fight was never in doubt as Canelo would cruise to a unanimous decision win.

As technically good as Canelo was, last night’s fight wouldn’t rank in my top 5 of Cinco De Mayo weekend fights.

To qualify as a great Cinco De Mayo fight, the combination of the hype and the fight itself must be great. It isn’t satisfactory just to have two “name” fighters.

Don’t blame Floyd for this ranking so low. Pacquaiao didn’t show up at all. His failure to cut off the ring allowed Mayweather to control the tenor and pace of the fight. It didn’t help that Manny invented a shoulder injury to explain why he was so awful.

So why did the fight make the list? Mayweather made Pacquiao look ordinary. Even with Mayweather in the pocket, Pacquaio did a lot more thinking than punching. A testament to Mayweather’s counter-punching ability. It was the highlight moment of Mayweather’s greatness and the solidification that he’s the greatest fighter of this era.

This would be the first fight of four. Pacquiao got off to the fast start flooring Marquez three times in the first round. The first two came on the same punch… a straight left hand right down the middle. Marquez would slowly but surely catch up on the scorecards to, what some thought was, a controversial draw.

This would be the first of four great fights.

The 2005 Ring Magazine Fight of the Year gave fans one of the most action packed rounds of the decade.

The start of the 10th round saw Castillo dominate a tiring Corrales. Castillo would floor Corrales twice in the round including one that was a legitimate 9 count. Referee Tony Weeks’ decision to allow the fight to continue gave Corrales the opportunity to land one of the most dramatic left hooks of his career.

With Castillo visibly hurt, Corrales would muster up the energy to land several more lefts that would back a defenseless Castillo to the ropes. Corrales would finish him off as Weeks would stop the fight.

Unlike Pacquiao, Mayweather would fight Cotto at 154 and it produced an exciting fight. No other fighter has been able to land the type of punches, Cotto landed on Mayweather that night. With most of the fight taking place at close quarters, Mayweather would best Cotto in an un-Mayweather like fashion.

Cotto landed enough punches to bloody Mayweather’s nose but the Greatest of his Era would still dominate the fight in stretches. Despite fighting the heavier fighter, Mayweather would hurt Cotto in the 12th round on his way to a unanimous decision win.

This fight brought boxing so much from HBO’s hit series 24/7 to the birth of “Money” Mayweather. During the pre-fight tour, it was obvious that Mayweather go under the skin of De La Hoya.

As expected De La Hoya came out as the aggressor as Mayweather collected data. Throughout the pre-fight tour, Mayweather continuously said Dela Hoya tires in the second halves of fights. This proved to be prophetic.

A lot of De La Hoya’s aggressiveness was ineffective as Mayweather would pick and choose his spots to pop shot the Golden Boy. Mayweather would land 47% of his punches including 53% of his power punches in the curiously split decision win. Judge Tom Kaczmarek would inexplicably score the fight for De La Hoya.

After the win, Mayweather’s career would take off to epic proportions as he would end his career, 50-0.