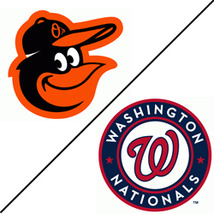 Baseball Struggling Around the Beltway

Off the field, Washington Nationals and Baltimore Orioles have battled in court over broadcast rights. On the field they’re battling to see who can have the more disappointing season.

To be fair, there wasn’t much expected from the Baltimore Orioles. The problem is, it might be worse than originally thought. Not only are the Orioles an after thought on the national stage, they aren’t even valued in the Baltimore-DC corridor. Without using a search engine, tell me who the manager is?  You don’t know, do you? It is Brandon Hyde. I know because I went to a search engine to look it up.

Recently Hyde called Baltimore’s pitching “inexcusable at this level”. That pretty much sums up how bad the pitching has been in the Crab City.

The Orioles have allowed 5+ home runs in 7 games, the most in a season in the history of the American League.

When the Orioles bullpen isn’t giving up home runs, they’re walking batters. The pen ranks 28th in walks given up. This all adds up to a bullpen whose ERA is 29th in the league. The only reason they aren’t last is because Washington is doing them a favor. The Nats bullpen has the worst in ERA the Major Leagues at 6.89. The team that allegedly had everything coming into the season is proving to have little to nothing despite having an embarrassment of riches at the starting pitcher position. How can a team with Stephen Strasburg, Max Scherzer, and Patrick Corbin be 10 games out of first place this close to June?

The Nationals have to be kicking themselves for several reasons. Coming into this season, Washington had been first or second in the division for seven straight years. They have all but squandered those opportunities by failing to win a single playoff series. In fact, not winning a playoff series cost Dusty Baker his job in Washington. Despite Baker’s lofty record, the owners felt compelled to fire him for a guy who looks to be over his head.

Couple this with the loss of Bryce Harper to the Phillies and the question becomes where does Washington go next? Do you fire GM Mike Rizzo? Why should Rizzo be the fall guy when he wanted to trade Harper last season but had it vetoed by the Lerners? Instead of getting some prospects back, all the Nationals ended up with was a compensatory pick.

There’s still plenty of time for the Nationals to end up with a respectable record. It will take a pretty good month but they could work their way up to second place in the division with no real chance of winning it. That will allow everyone to use the “if we didn’t get off to a bad start” excuse and keep their jobs.

But, as of now, baseball around the beltway is awful. The two franchises have combined for a 34-66 record. No one expected this even if the Orioles only had 5 wins to this point. So fans are in for a long hot summer of disappointing baseball. The only thing that can cheer this area up is some Ben’s Chili Bowl and crab cakes.