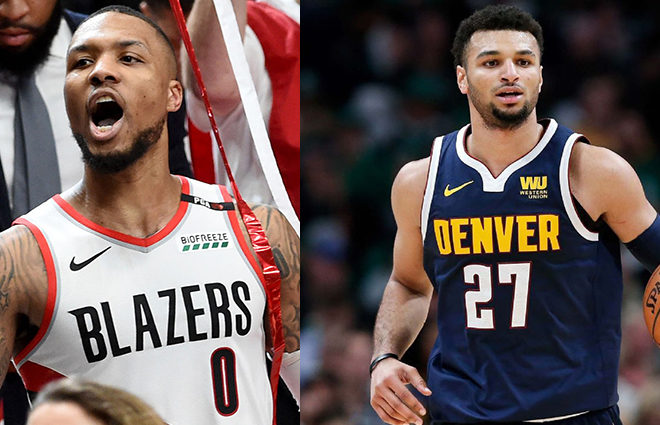 When the season started, I don’t know if too many experts thought these two would be playing for a spot in the Western Conference finals. Sure, Portland has a dynamic back court but would eventually lose Jusuf Nurkic to injury. The Nuggets missed out of the playoffs by a game last season but is void of a superstar even though, Nikola Jokic is right below that status.

The Blazers dispatched of the Oklahoma City Thunder in five games. Winning didn’t shock experts as much as how quick it happened. Of course, the highlight of the series was the game/series clinching three pointer by Damian Lillard.

The shot heard ’round the world 🌎 pic.twitter.com/z7xKMSy7mO

The Blazers would lead the NBA in playoff three point shooting in the first round of the playoffs.

Enes Kanter isn’t Jurkic but he has been a solid back up plan. Kanter averaged 13.2 points and 10.2 rebounds per game. The flip side is Kanter’s defense is known for all the wrong reasons. He doesn’t defend the pick and roll well and the Nuggets are pick and roll based with Jokic being involved in a lot of them. Jokic averaged 25.7 points, 9.7 rebounds a game against the Blazers.

As much as Portland’s back court gets a lot of  attention, Denver’s isn’t too shabby either. The Nuggets back court had an impressive 2.84 assist/turnover ratio against the Spurs in the first round. The back court starts with the play of Jamal Murray. The Kentucky product averaged 19 points per game against the tough Spurs defense.

After a down season, Gary Harris woke up a bit in the Spurs series. Harris shot 46.7% from the three point line in the series.

But, for the Nuggets the series could come down to the contributions of Malik Beasley, Will Barton, and Monte Morris. Their ability to support Jokic’s and Murray’s scoring could be the difference between close wins and close losses.

Denver was 3-1 against the Blazers during the regular season but Portland is playing as well as any team.