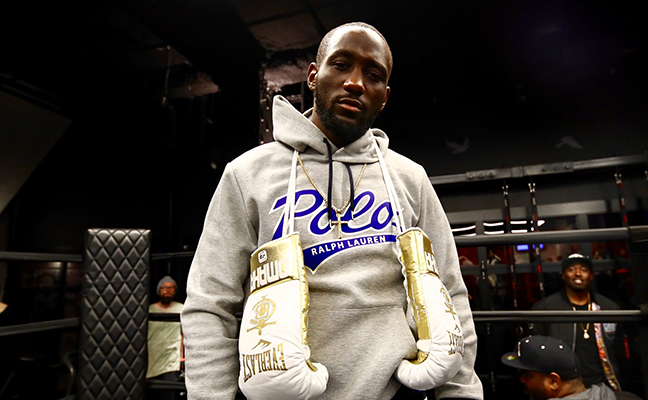 Terence Crawford (34-0) is on everyone’s pound for pound list but what is his signature win? Yuriorkis Gamboa? Jeff Horn?

He really doesn’t have one. Most will say that’s because of age old boxing politics that kill historic fights because boxing promoters can’t find common ground. There was talk of fighting Manny Pacquiao but the Filipino star avoided the fight and then signed with Premier Boxing Champions (PBC). That all but killed any chance of Crawford getting that fight. PBC has a lock on Crawford’s biggest paydays. Errol Spence, Keith Thurman, Shawn Porter, Danny Garcia, and Mikey Garcia are all under PBC’s umbrella. At this time, no one can see an agreement between Bob Arum’s Top Rank boxing and PBC especially with the new broadcast agreements with non-traditional providers.

With that being the backdrop, you can make a case that Saturday’s fight against Amir Khan is just as important to Crawford as it is to his opponent. “I feel like I’m already the best pound-for-pound fighter in the world. Beating Amir Khan would only solidify my place in the sport,” said Crawford.

The danger that presents itself is, will Crawford press so much for an impressive victory, that he makes an uncharacteristic mistake?

Khan has always been “close but not close enough”. At first glance, his resume is impressive. He has wins over Marco Antonio Barrera, Paul Malignaggi, Marcos Maidana and Zab Judah. But after the Judah victory, the quality wins went away. There was the controversial split decision lost to Lamont Peterson. To be fair, it really looked like Peterson received a hometown decision. But losses to Danny Garcia and Saul Alvarez presented no such controversy. In both fights he was knocked out solidifying his critics who say he has a glass chin.

But if there’s one thing you can say about Khan is he doesn’t lack confidence. I am confident I can win this fight because he has never fought anyone like me. “I have power, speed, and movement, and he has certainly never fought a welterweight like me,” said Khan.

Keys to Victory for Crawford

Patience: For Crawford, everything will start with being patient. Khan will be the best fighter he’s faced from a technical perspective. We saw him do that in his last fight when he faced the antagonistic, Jose Benavidez Jr. In the 12th round TKO, Crawford waited to get an opening to close the show and it happened in the last round.

Body Work: Khan will want to utilize his movement to stay away from Crawford’s power punches. Crawford will undoubtedly want to slow Khan down. That means taking Khan’s body away. This is easier said than down. You can best believe Khan will try to use the jab to keep Crawford away and the uppercut if he sees the opportunity. But Khan will need to be careful. It was a failed attempt at an uppercut that allowed Crawford to land the punch that knocked down Benavidez Jr. and enabled him to close the show.

Keys to Victory for Khan

Jab-Jab-Jab: One of the things that gives Khan a legitimate chance to give Crawford trouble is his jab. Khan’s quick hands allows him to set up his punches perfectly when he gets a chance. His downfall happens when he decides that he’s going to stand in front of his opponent and exchange. This faulty use of his speed is why Garcia and Alvarez knocked him out.

Movement: Khan needs to stay out of the pocket. He will need to pump his jab and get a half step out of anything Crawford throws in response. Khan can’t afford to get caught early in the fight. He has yet to prove that he can survive trouble against a quality opponent.

Crawford in 6 rounds. This could be a carbon copy of the Danny Garcia fight. Garcia pounded Khan to the body in the third round. Despite Khan’s speed, Garcia’s timing ended up being perfect and hurt finished Khan in four rounds. Khan won’t go that fast this time around but he won’t be around much longer.