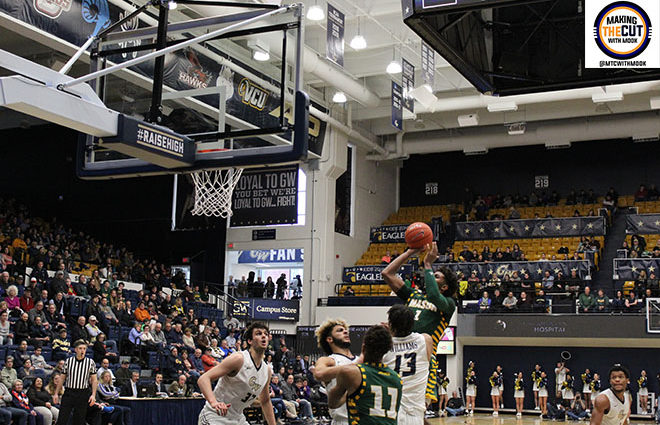 George Mason needed a win in the worst way. The Patriots had been dominated in three of their last five games including getting housed on Senior Night by rival VCU.

They would get what the doctor ordered as the traveled to George Washington and walked away with a dominating 81-65 victory.

Foggy Bottom is just a stone’s throw away from Fairfax and despite the struggles of late, the Patriots had their share of fans in the building.

Jordan Miller got the Patriots off the a fast start scoring their first five points as George Mason quickly got out the a 5-0 lead. The lead would eventually get as large as 17 as Mason shot 50% in the first half. Miller would score 14 points and grab 7 rebounds in the first half.

George Washington’s offense struggled throughout the half. The Colonials would shoot 37% in the first half and was just 1-7 from the three point line.

The Colonials would start the second half scoring six of the first eight points. But Mason would start working the ball back inside. Greg Calixte would have a dunk and layup early on in the half as George Washington’s perimeter defense tightened up.

The work inside would open up the floor for Mason as they would eventually blow the lead up to 20 points. But George Washington would go on a 9-0 run to cut the lead to 11 at 58-47.

Mason would respond. Javon Greene would hit back to back three pointers, pushing the lead back to 17. George Washington would eventually cut the lead to 12 but would get no closer.