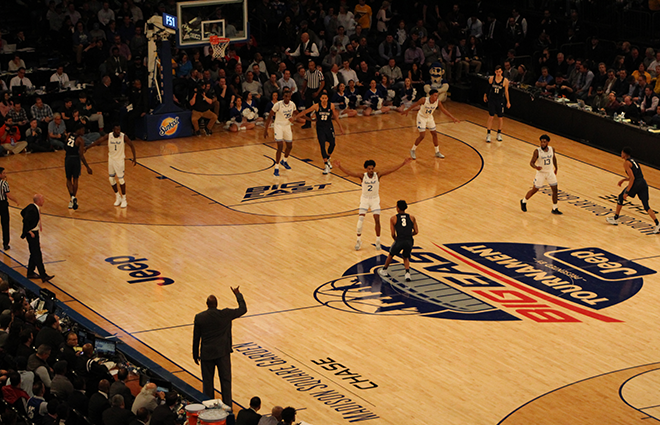 Any talk of Georgetown making the NCAA tournament died tonight on the Garden floor. The Hoyas were manhandled by Seton Hall 73-57.

The first half was a house of horrors for the Hoyas. They turned the ball over 9 times. Georgetown head coach, Patrick Ewing lamented the sloppy play. “Turnovers. Turnovers hurt us. You know, we went down big early, and it was trying to dig yourself out of a hole, and when the turnovers, unforced turnovers hurt us. They had 22 points off our turnovers the entire game. But I think in the first half, they had 12 points off our turnovers, and that’s something that we can’t — it’s hard to overcome. When you’re turning it over and you’re not getting stops, the other end, it’s hard to win,” said Ewing.

Jessie Govan only scored 2 points as Seton Hall led by as much as 30. Pirates star, Myles Powell, had 29 points… at halftime.

The Hoyas would get to within 14 in the second half before Seton Hall blew it back open.

So goes the season for a Georgetown team that came in winning three of their last four games. The only loss in that stretch was the very ugly loss at DePaul. Tonight’s loss was uglier.

Govan will end his with a lot of accomplishments, just no NCAA tournament appearances.

Player of the Game: Myles Powell

Not only did Powell set a Big East tournament record for points in a half (29) but he also outscored Georgetown (28). He was unstoppable the entire night. Powell would finish the night with 31 points.