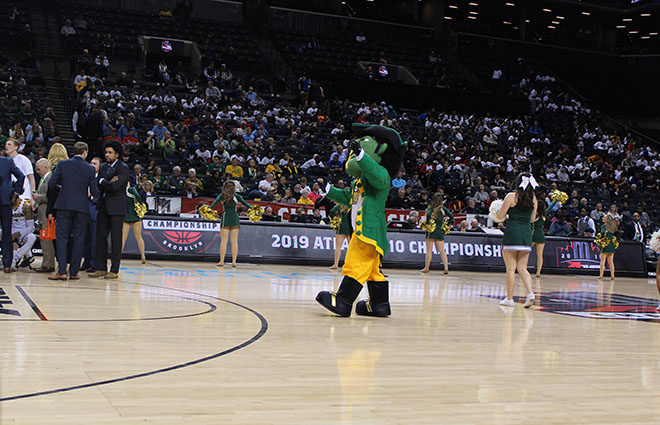 George Mason would survive a scare from George Washington in the second round of the Atlantic 10 Tournament. After dominating the Colonials last week, the Patriots held on for a 61-57 victory. “This is survive and advance time,” said George Mason head coach Dave Paulsen.

George Mason looked like they would run away with the game in the first half, leading by as much as eight. But, a late run led by Javier Langarica effective play inside and an Armel Potter layup in the last minute had game tied at 31 at halftime.

The second half was a back and forth affair. George Washington would take a five point lead, their largest, with 6:22 left in the game. The Patriots would respond with a 10-2 run that would give them a three point lead with 1:29 left. “For the most part, adversity, our guys have responded to it,” said Paulsen.

Perhaps the most important sequence would come with 14 seconds left in the game. With George Mason up three points, Otis Livingston II stepped to the free throw line to shoot a one and one. He would miss the first but Javon Greene would out-battle Javier Langarica and get the offensive rebound. “I felt like he grabbed me.” George Washington’s center Javier Langarica. Greene would step to the line and make both free throws.

Player of the Game: Justin Kier

Kier had 26 points on 10-14 shooting. On a day where both teams struggled shooting the ball, Kier was the bright spot for the Patriots. Along with his 26 points, he grabbed 8 rebounds.