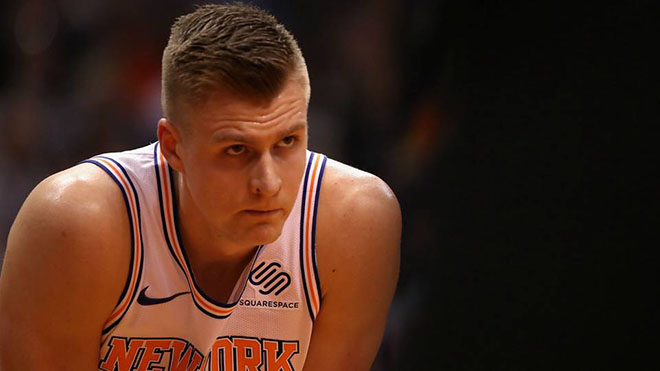 Knicks Finally Get it Right

The New York Knicks might’ve made the best trade they’ve made in years. On Thursday, the Knicks brass traded European Diva, Kristaps Porzingis, to the Dallas Mavericks.

The Knicks received Dennis Smith Jr., DeAndre Jordan, Wesley Matthews, and two future first picks for Porzingis, Tim Hardaway Jr., Courtney Lee, and Trey Burke. On paper, people will look at the names and think the Knicks were crushed in the trade but this would be incorrect. The Knicks won the trade even before the trade deadline ends and free agency begins.

Porzingis and his camp were already making enough noise to make you think he wasn’t staying for the long term. He skipped the exit interview with the organization because he was upset with Phil Jackson. When the Knicks gave an update on his rehab, he posted a photo of him running on a treadmill. Diva type behavior that was undermining the front office. This all started when Carmelo Anthony was traded.

This was the person you were going to entrust with your organization? Superstars have had a say in NBA front offices but Porzingis hasn’t established himself as a superstar. LeBron doing it is one thing, Porzingis isn’t LeBron.

That should’ve set off red flags to the Knicks brass. They are seeking a culture change not only in the organizational structure but also on the floor. If reports are accurate, GM Scott Perry is allowed to do his job without interference. The organization is giving the young players a chance to play which is much different than “tanking”. They need to see what they have in Kevin Knox, Mitchell Robinson, Frank Ntilikina and Emmanuel Mudiay. They don’t have time for the KP circus.

It’s about time the Knicks stood up and acted as an organization of value. Fans might not think they are and, heck, it’s easy to argue that they aren’t. But, they can’t keep living in the past. There comes a time where they needed to draw a line in the sand and say “enough is enough”. That’s what happened with Porzingis.

And, by the way, Porzingis’ actions were in stark contrast of Carmelo Anthony’s. Anthony gave the organization everything he could. He wanted to be in New York. He frequently took the high-road when Phil Jackson would attack him in the press. Porzingis should’ve have pouted a little less and watched how a professional acts.

Can you build a team Porzingis?

Porzingis has only played 186 games since being drafted. It’s been injury and injury. It’s another reason why I don’t know why people are acting like he’s a superstar. If that’s the case, he has to prove it on the court and that means he has to stay healthy enough to be on the court. Some are so sure a team can be built around Porzingis but how can anyone be sure?

When you look at the NBA, ask yourself the question? Can you build a team in today’s NBA around a stretch 4? The Warriors aren’t built around Kevin Durant plus Porzingis isn’t in Durant’s stratosphere. Giannis Antetokounmpo game isn’t predicated on stretching. His ability to break down his defender and score in various ways is far superior to Porzingis.

Would the Knicks get better as Porzingis got older? Maybe but the only way they were going to win a championship was the bring in another superstar who was better than him. Something I’m not sure Porzingis diva-like ways could’ve handled.

After the trade went down, the airwaves were filled with what the definition of success would be for the Knicks. There were some who said the Knicks must end up with Durant and Kyrie Irving or it was a disastrous trade. But no one wanted to address the other side? What’s the expectations for the Mavericks?

If Porzingis is what his defenders say he is, this should be a championship move, right? The Mavs have a star in the making in Luka Doncic. They have a top five, championship winning coach. The pressure should be on Porzingis to lead the Mavs to the championship especially with the inevitability of the Warriors taking a step back in the next two or three seasons.

There shouldn’t be a Steve Nash type free pass given to Porzingis. Heck, it shouldn’t have been given to Steve Nash. For all the talk of this being the next generation of Dirk Nowitzki–Steve Nash, lets remember that the Mavericks didn’t win the title until Nash was shipped out of Big D.

Never thought the New York Knicks could unload Tim Hardaway Jr’s awful contract but here we are. The Mavericks were so desperate to get Porzingis that they took on the volume shooter’s bloated contracted.

In return, the Knicks got the sometimes overrated, cap space. With enough cap space to sign two max deals, most are pumping out big names but when if the Knicks don’t end up with Durant or Irving? It will still be ok. The draft assets acquired would still put the Knicks in position to make a deal for a superstar. In the meantime, the Knicks have both Knox and Smith Jr. on their rookie deals.

If the Knicks allow Scott Perry to do his job unimpeded, he can build the Knicks into a long term winner. This means no taking on bad contracts nor giving them out. Perry has gotten what every GM would love to have… a reset. With the exception of Ntilikina, the Phil Jackson mess has almost been cleaned up. Perry has a chance to build the roster around their current talent and Coach David Fizdale’s philosophy.

This is the first time in years the Knicks have been in this situation so spare me the doom and gloom. They’ve finally made a move that truly give them a chance. Embrace it.