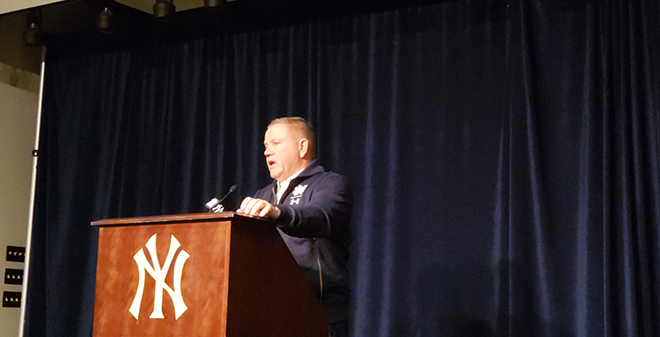 There are was a chilly feel in the air in the home of champions, Yankee Stadium. There was a lot on the line for the undefeated Notre Dame Fighting Irish. An undefeated record. A chance to solidify their argument for a spot in the College Football Playoff. All of this on a neutral field, against the 12th ranked, Syracuse Orange.

Notre Dame looked at what was on the line and obliterated the it. The Irish would dominate from start to finish dominating Syracuse, 36-3. “There’s no doubt that was a fantastic football team. That’s a very complete win over our football team that I think is at least a good team,” said Syracuse coach Dino Babers.

Syracuse came into Saturday’s game having scored 40 or more point in the last four game. They didn’t score until the last 10 seconds of the game when Syracuse elected to kick a meaningless field goal. Babers was asked why he would elect to go for a field goal in that situation. “When you’re running those plays you risk getting people hurt,” said Babers.

Defensive Coordinator, Clark Lea, dialed up a game plan that had the Orange feeling uncomfortable. Babers said the Irish defense turns the game from “chess to checkers”. The talent on Notre Dame’s defense has shown all year. They held the Orange to 234 yards total offense with a lot of the yards coming after the game was already decided. There were three interception with two of them by Alohi Gilman. The second interception was spectacular as Gilman got credited for a pass breakup and an interception. “It was an over route by my guy, I didn’t play it as well as I wanted to but I saw him catch it. At that point it’s playing ball at that point. Just strip him from the ball” said Gilman.

What made the defense even more impressive is when starting quarterback Eric Dungey went out, Notre Dame’s defense adjusted to Tommy DeVito’s ability to pass the ball. The Irish knew DeVito wouldn’t be as heavily involved in the run game so they dropped an extra player into coverage picking off DeVito twice.

The offense was a mixed bag. The running game was good but not great. On the surface, 36 carries for 171 yards (4.8 ypc) doesn’t look bad but the Irish never assumed control of the game via the ground game. Part of the reason was pre-snap penalties on the offensive line. Notre Dame had four false start penalties. Down in the red zone, the Irish settled for field goals twice and threw an interception on fourth and goal from the 1. They were far from perfect. As Kelly said “not as clean as we would like. Penalties and stalling in the red zone.”

But never fear, there’s Ian Book. The Notre Dame quarterback has changed the fortunes of the Irish and his Tom Brady-like ability impressed Babers. “I will say that the mobility of the quarterback at Notre Dame is definitely an advantage and guys get very, very close to him and you think you got him, and then all of a sudden he’s really slippery like an eel and he has the ability to, kind of like a punt returner to go up, to go back, to go in, to go out and our big guys really had trouble tracking him down,” said Babers. Uhhh… that’s a compliment right? Of course it is.

The only thing that stands between Notre Dame and a playoff bid is USC. It’s well documented that the Irish have traveled a lot over the last few weeks so fatigue could be a concern. But, if Notre Dame plays with purpose and discipline, they will take care of the Trojans. That surely will wake up the echoes.