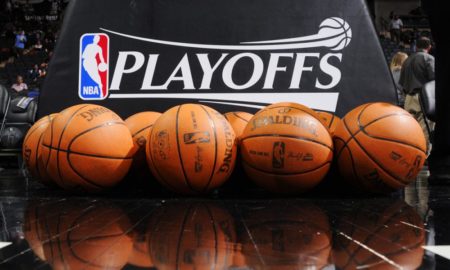 There’s only one question for the Western Conference playoffs, can anyone beat Golden State? Even though the question seems to have an obvious answer, the Western Conference’s first round is still chock full of story lines. Will Chris Paul and the Clippers get out of the first round? Can Russell Westbrook continue his triple double train? Can the Grizzlies push the 61 win Spurs?

Golden State swept the season series versus the Blazers. The closest game was a two point win in Portland with Stephen Curry sitting out. That night, Golden State had the one-two punch of Kevin Durant and Klay Thompson. Durant went for 33 and 10 while Thompson added 27 points.

Even though Damain Lillard predicted a Blazer win in 6, a successful series would be for Portland to steal one game.

This isn’t your typical 2-7 playoff match-up. The Grizzlies match up very well with the Spurs and could be a thorn in their side. The two early season match ups were won by Memphis (Kahwi Leonard missed one of the games) and San Antonio took the last two. Leonard averaged 24.3 ppg versus the Grizzlies this season.

Key here for the Spurs is how effective they are when they go big. By going big, they bring Marc Gasol and Zach Randolph into play. Randolph played only 24.5 minutes a game so he should be fresh. It’s the least amount of minutes he’s played per game since his second year in the league. If he can stay on the court, along with Michael Conley and Marc Gasol, this series will have some entertaining games that will come down to the last 5 minutes of the fourth quarter.

It’s hard to pick against a 61 win team especially when it’s the Spurs so even though you can argue that this is a toss up series, I’ll go with the Spurs in 6.

How can you not be excited about this one? Arguably the top two MVP candidates will be squaring off in a best of 7. Rarely have we seen this in the first round of the NBA playoffs so enjoy the gift that has been given.

Russell Westbrook averaged a triple double for the season. It was the first time that’s happened in 55 years. Some thought the Thunder would take a major step back with the departure of Kevin Durant especially when you consider they got nothing in return. But, before the season started, Vegas had the over/under on wins higher for the Thunder (45.5) than the Rockets (41.5). That speaks to what Harden has done this season. His ability to lift up his supporting cast hasn’t gotten the coverage it deserves because his reputation of being nothing but a scorer is stuck in people’s mind.

Oklahoma City won the first game of the series and that was it. The Rockets would take the last three, even though, Westbrook posted a triple-double in two of them.

Strangely enough, the difference in the four games was the Rockets bench. Their bench has outscored the Thunder bench 180-114 in the four games. Traditionally, benches play less in the playoffs which gives even more emphasis on their contribution. Rockets win in 6 because of their depth.

Another year, another “Chris Paul is running out of chances” headline. Paul has never led a team further than the second round of the playoffs. Two years ago, Paul’s Clippers defeated the Spurs in the first round only to blow a 3-1 lead to the Rockets in the next round. This included blowing a 19 point lead at home in Game 6. A game where the Rockets went to the bench during the critical stretch and eventually outscored the Clippers 40-15 in the fourth quarter. Despite having 31 points and 11 assists in that game, Paul finished with a -8 while on the floor.

The Clippers had a solid 51 win season but when you play in the same conference with the top 2 wins leader in the NBA, there isn’t going to be much ink about it. Also, under Doc Rivers, the Clippers have won fewer games each season under his tenure.

The upstart Jazz are playing with house’s money. Before the season, they were a popular “make the jump” team and they did just that. Under Quin Snyder, they’ve improved each season. Snyder took over a 25 win Jazz team and immediately led them to 38 wins. From 38 wins, the Jazz jumped to 40 and this season won 51 games, the same as the Clippers. The addition of George Hill has been huge for Utah. He averaged a career high, 16.9 points a game and gave them stability at the point.

Traditionally, NBA teams need to get their feet wet before winning a playoff series especially when the team is young. This might be the last rodeo for the core group of the Clippers and that desperation coupled with the Jazz youth gives them the edge. Clippers in 6.