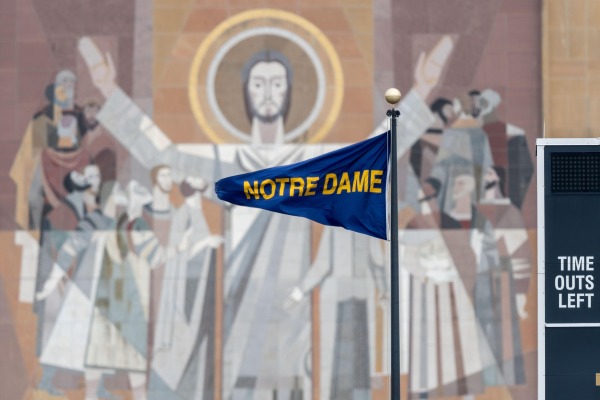 Being Notre Dame Football is tougher and more challenging than their detractors are willing to acknowledge. The perception that Notre Dame gets every break known to man because they had a contract with a major network long before we saw huge conference television contracts has been created more by jealousy than anything else.

Notre Dame’s Independent status has made things tougher for the Irish not easier. This season is a prime example of one of the hurdles they face. When the program suffers an early season loss or two what are they playing for? Even before the birth of the College Football Playoffs, Notre Dame faced an uphill battle before the season started because a loss or two would cripple their chances to play in the BCS Championship game.

It’s even more daunting with the College Football Playoffs since only four teams can play for the National Championship and those four teams are selected by a committee that doesn’t have any guidelines. Those who claim it’s easier for Notre Dame continue to lie to themselves. It’s actually harder for the Irish when you consider that they are considered a Power 5 even though they don’t play in a Power 5 Conference.

When teams play in a conference, you can still keep the attention of your players and fans by touting that the team can still be conference champs. No one personifies this more than Oklahoma. The Sooners were highly ranked at the beginning of the season but they are off to a 1-2 start. The Sooners can still make it to a high ranking bowl if they win the Big XII conference whereas Notre Dame doesn’t have that luxury.

There’s no doubt that Notre Dame has brought some of this one themselves starting with a manufactured quarterback controversy. Then the arrests of 6 Notre Dame players which led to the dismissal of their starting safety Max Redfield. And just this week, Brian Kelly fired Defensive Coordinator Brian VanGorder after several bad performances by the Irish defense.

So here the Irish sit at 1-3 with an embarrassing loss to Duke on their resume. The question that looms over them like a storm cloud is “what is there to play for”? There’s no conference championship to bail them out of the hole they’ve dug. There’s no way to appease the fan base by hanging a conference championship banner in a three loss season, something that is very possible in Norman.

After the Duke loss, Coach Brian Kelly said “There’s no fun, there’s no enjoyment, there’s no energy.” Coach Kelly is right but it’s his job to create an environment that allows his players to exhibit the very characteristics he says they are void of. So Kelly has to find a way to wake up the echoes during one of the worse times in his tenure. It’s one of the many challenges of being Notre Dame.